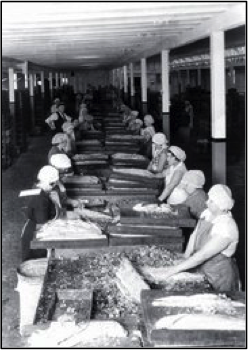 The French canners first introduced the tuna canning industry in 1850. This industry did not take root in the United States until 1903 because of a shortage in sardines. Thus, the sardine shortage of 1902 in the United States propelled Southern California fisherman to look for new types of fish to can and consequently the California Fish Company was born. The demand for albacore in the East Coast caused the tuna industry to boom and fostered the rapid construction of canneries along the coast of Southern California. From the years of 1911- 1912, five new canneries opened in the ports of San Pedro, Wilmington, Long Beach, and San Diego.

Read More About the History Here:

The San Diego Tuna Industry and Its Ethnic Community 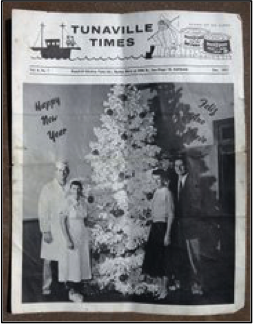 San Diego’s first tuna cannery was called the Pacific Tuna Canning Company and it was located in what is known today as Logan Heights. The community during the height of the industry, the early 1950s, was one that was very diverse and one that generated approximately $65 million for its 17,000 locals. This cannery obtained most of its albacore supply from boats ran by Japanese and Portuguese immigrants. Thus, this industry supplied many jobs and brought in Italian and Mexican families as well as the Japanese and Portuguese immigrants.

These immigrant families came to San Diego for the job opportunities the tuna industry brought them.   A Japanese- American, Frank Koide, whose parents were Japanese immigrants and worked in the tuna industry stated, “I worked in a cannery and also fished for a few years. I found out that the work was too hard so I went to college.” Many immigrants like Koide’s parents flocked to the area in order to support their families by working the hard labored jobs the canneries provided. 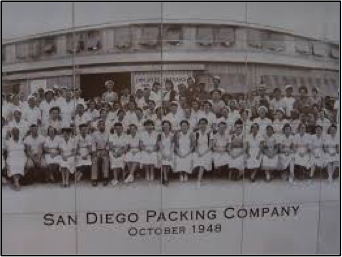 Aside from immigrant families, generations of local Mexican families were also able to make their living from tuna. The men worked in the fishing boats while the women processed and packaged tuna at the canneries. One National City native who worked in the industry for 35 years, Eloisa Osuna, described work as “wet smelly and messy” and that while work was hard “everybody was happy”. Osuna earned 80 cents an hour cleaning tuna and the payment process can be described as follows: “The women wore a sign pinned to their back, and every time they got another tray, a hole was punched on it”. Maggie Walton, an exhibit designer at the Martime Museum of San Diego states, “They got paid by how many trays they finished.” Since the canneries ended up being in the barrio areas, the Latino community ended up being a major source of the work force like Osuna. Manuel Levya Jr., whose father worked in the canneries stated, “My father, Manuel “Acaulco” Levya, put six kids through college from his job at the cannery. He loved his job, his family, and had a great life. All his kids are grateful to him.”

The San Diego tuna industries began to decline in the 1970s because of stricter fishing regulations enacted to protect dolphins and this consequently increased foreign competition. This caused the canneries to come to a close and the community to change drastically. A member of the community, Ramon Chunky Sanchez, describes what happened to the community as follows: “When the cannery business shut down many people left the community. Slowly the community became economically diminished. These businesses kept the diversity in Barrio Logan with for example the many Italian in the community. The cannery brought many Italians into the area.” Other members of the community, Norene and Natalia Riveroll stated, “When the cannery business dismantled it was hard on the people in the barrio. This affected so many different people. Many of them were never able to find work again.” Thus it can be concluded that through the sudden loss of the tuna canning industry, the diversity and economy of Barrio Logan declined. Many of the immigrants that had come to the community for the jobs the tuna canning industry had brought in left, transforming the community into one the was predominantly Latino. 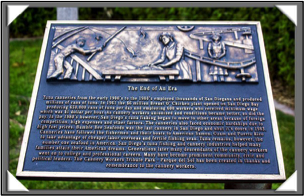 Today, while the buildings that once housed the tuna companies are abandoned, there are imprints that remind visitors and residents of the tuna industry of the past and the profound affect it had on the community. The San Diego Unified Port District unveiled sculptures honoring the cannery workers. The Continental

Maritime also donated a site that has been turned into a small park called Parque del Sol, which is right across from Cesar Chavez Park. This site was the location where many of the tuna industry workers would take their breaks. A small tree that was planted in 1970 by a former cannery worker, Roberto Carrero and his co- workers also marks this site. This now large tree was incorporated into the art in order to really integrate the community that was involved in working the tuna industry. Carrero states, “I’m going to bring my grandkids here, show them the sculpture, and tell them my cannery stories.” Port Commissioner, Robert “Dukie” Valderrama, spoke from the experiences of his mother, sister and eight other relatives who worked in the Van Camp and Bumble Bee canneries. Valderrama stated, “The artists captured what the tuna industry was all about. The canneries taught a work ethic. It was hard, physically demanding work. And yet, the workers liked their jobs because their co- workers were their friends, neighbors and family members. The new display will enable former cannery workers to reflect on their contributions to San Diego.” For others it will be a spot where “they can look around and realize the rich tradition and history of this place.”