The “Danza Chichimeca-Conchera-Azteca-Chicana” is a historical narrative of Chicano Park and its importance to the development of Danza Chichimeca-Conchera-Azteca-Chicana in Aztlan. This pillar project is a creation of Danza Mex’cayotl under the direction of Capitán-General Mario Aguilar. General was a founding member of Toltecas En Aztlan, the first Chicano Danza Azteca group in Aztlan.

This pillar incorporates the seminal history of Danza at Chicano Park from 1975, when General Florencio Yescas first brought la Danza to Chicano Park Day, to 1985, the year Maestro Yescas passed away.

Until the arrival of the Danza Chichimeca-Azteca tradition to Chicano Park, most Chicanos were firmly planted in the “Hispanic/Latin” roots of Mexican Culture. Spanish señoritas, macho bullfighters, Mariachis and mean-looking revolutionaries were the main focus of Chicano imagery in song, poetry and calendars at tortillerías and tienditas. Many Chicanos knew about their indigenous roots through vague family legends, Mexican films, and visits to Mexico’s pyramids.

With Florencio’s group “Esplendor Azteca”, we Chicanos and Mexicanos saw for the first time the LIVING, authentic expression of our indigenous and mestizo roots. From this time forward the paradigm of Chicano identity shifted to our ancient roots on THIS continent. This paradigm shift united recent immigrants to Chicanos who had lived on this side of the border for generations.

For over five centuries, the indigenous, African, and mestizo peoples of this continent have been demeaned and made to feel less than the “white” invaders that crossed the Atlantic from Europe to steal, rape, and plunder the original peoples of this land and their resources. European missionaries came (and are STILL arriving) to demonize our spiritual traditions and to give the colonial genocide a “holy” foundation. This PIGMENTOCRACY is deeply rooted in our history books, literature, films, mass media and most importantly – in our educational systems.

Danza Chichimeca-Conchera-Azteca-Chicana has given our people several tools to create self-reliance, self-determination, and agency:

Since the 2009 publication of Capitán Aguilar’s dissertation, “The Rituals of Kindness: The Influence of the Danza Azteca Tradition of Central Mexico on Chicano-Mexcoehuani Identity and Sacred Space”, there has been a steady flow of research by young Chicanos exploring the documented roots of La Danza (as opposed to hearsay, and anonymous-based YouTube, and other mass media sources). More and more Chicanas/os have gone to Mexico to meet and learn from traditional dancers from throughout Mesoamerica.

The purpose of this pillar is to highlight the early years of Danza en Aztlan, and the critical role Chicano Park has played in its explosive growth from 1975 to 1985.

Our primary audiences are:

The primary goal of our pillar is to highlight the continual link from 3,000 years ago in Mesoamerica to today’s Chicano Park. The “Danza Chichimeca-Conchera-Azteca-Chicana” has made Chicano Park a SACRED SITE, just like the pyramids and churches of Mexico. It has been sanctified by scores of Chicano Danza ceremonies (dancing, weddings, baptisms, and funerals). Because of la “Danza Chichimeca-Conchera-Azteca-Chicana”, Chicano Park is revered as a sacred place for all Raza, from Washington State to New York. Chicano Park has made true the prophecy: WHEREVER THERE ARE CHICANOS, THAT IS AZTLAN.

Our pillar, the “Danza Chichimeca-Conchera-Azteca-Chicana” at Chicano Park seeks to convey the message that we are always living in historical times. WE, and only we, can change the future of our gente for the better. We are a link in an ancient chain that goes back at least 3,000 years. We are the connection that links this ancient past to the next 3,000 years of Chicano history. We cannot afford to be the weakest link that destroys this chain of history for our grandchildren and their great-grandchildren. ¡El es Dios!

Danza In Chicano Park Throughout the Years 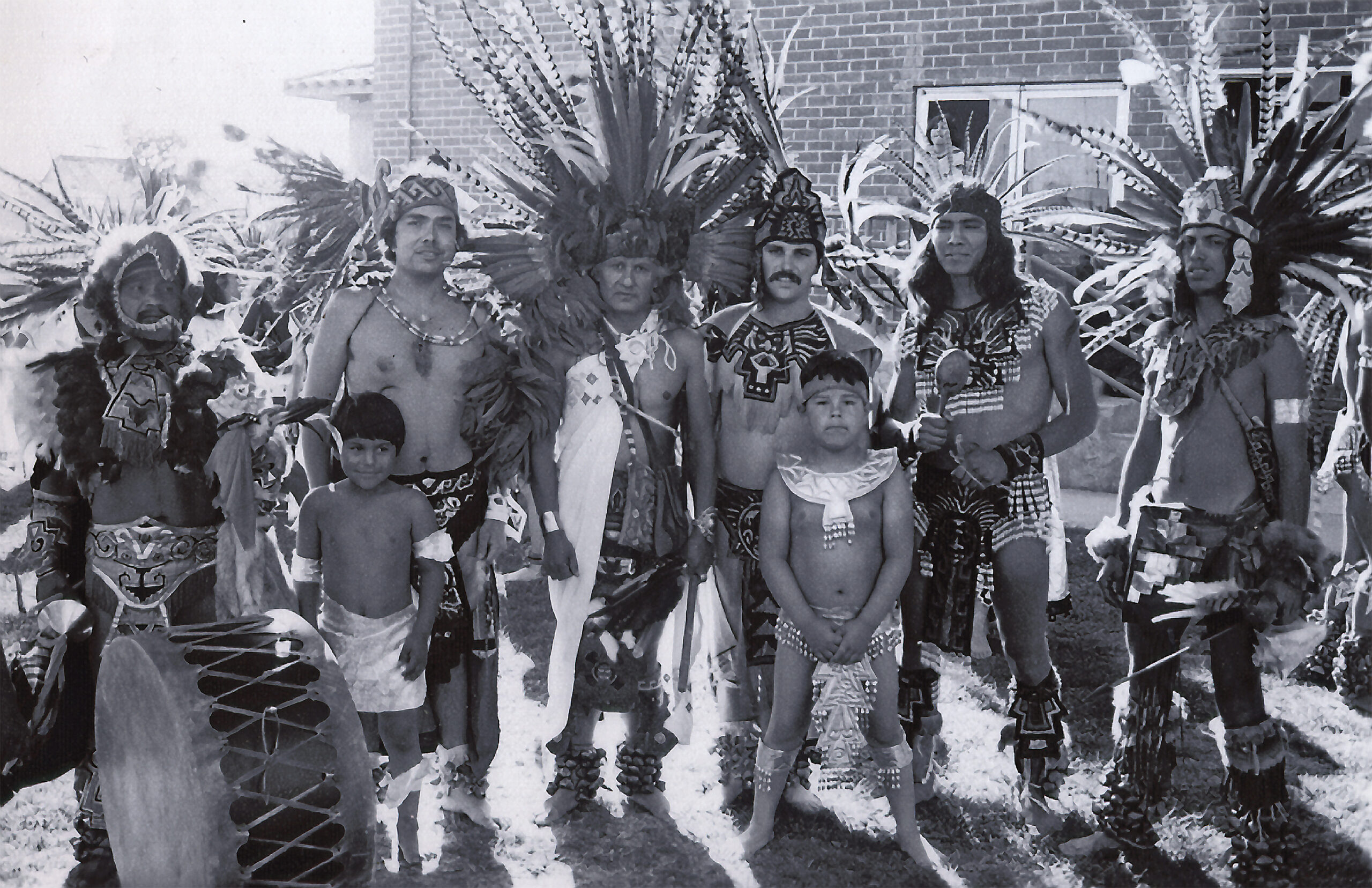 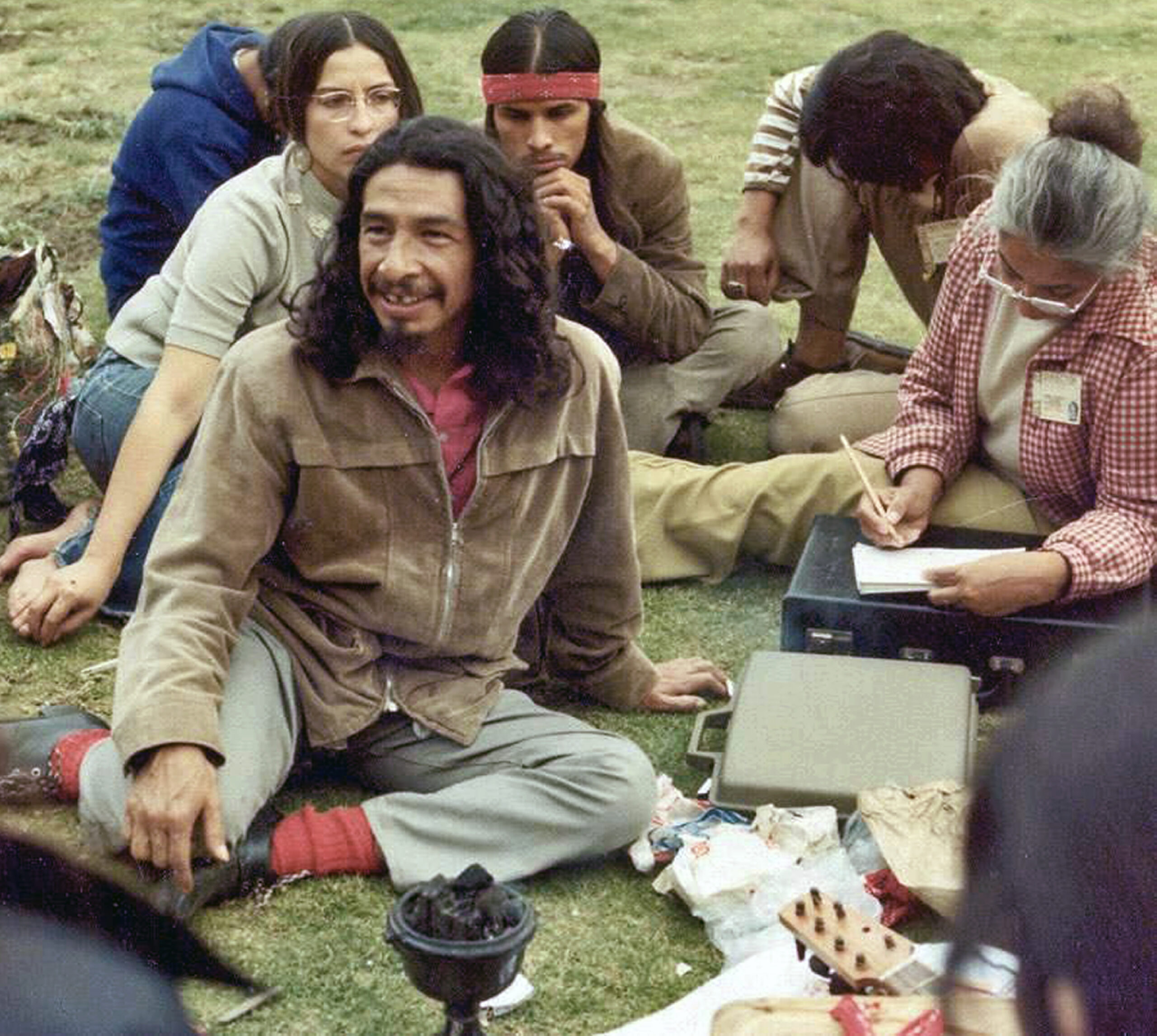 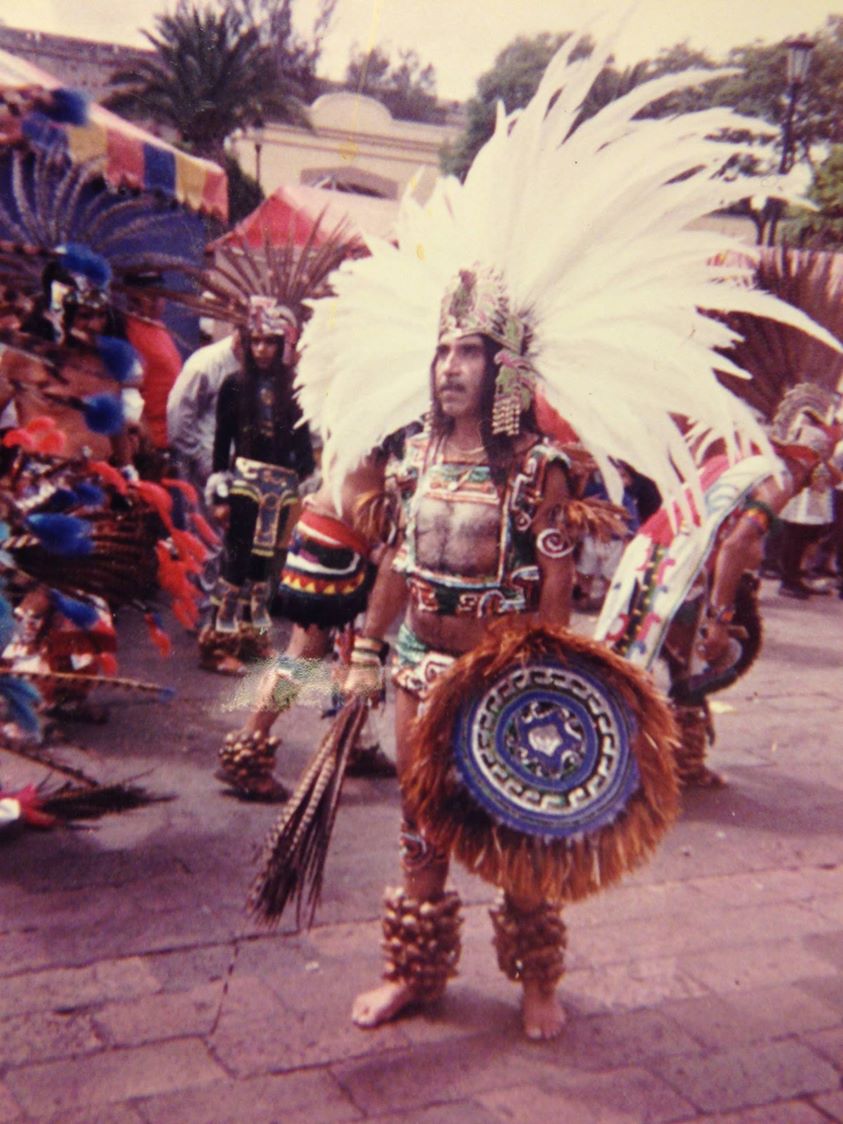 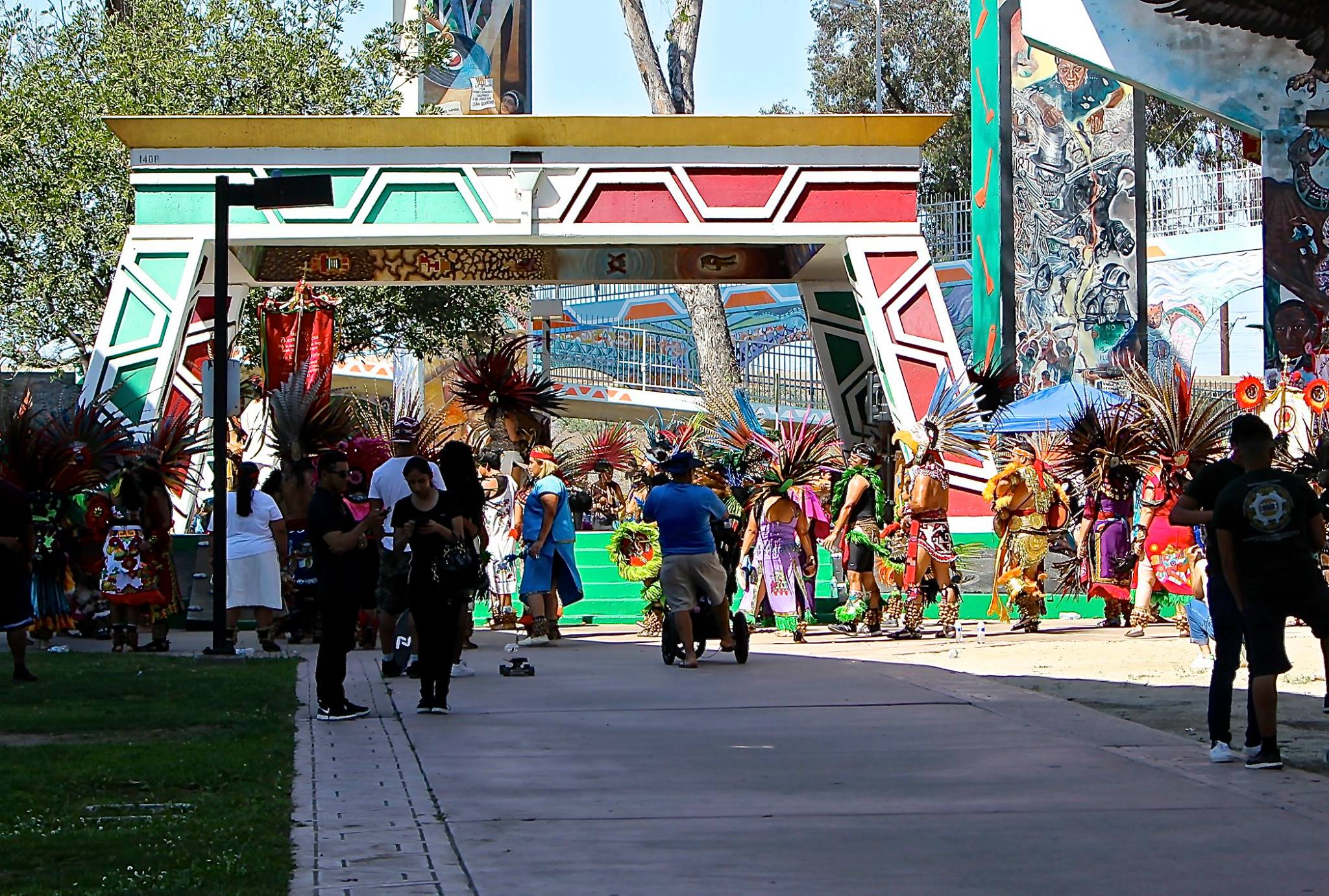 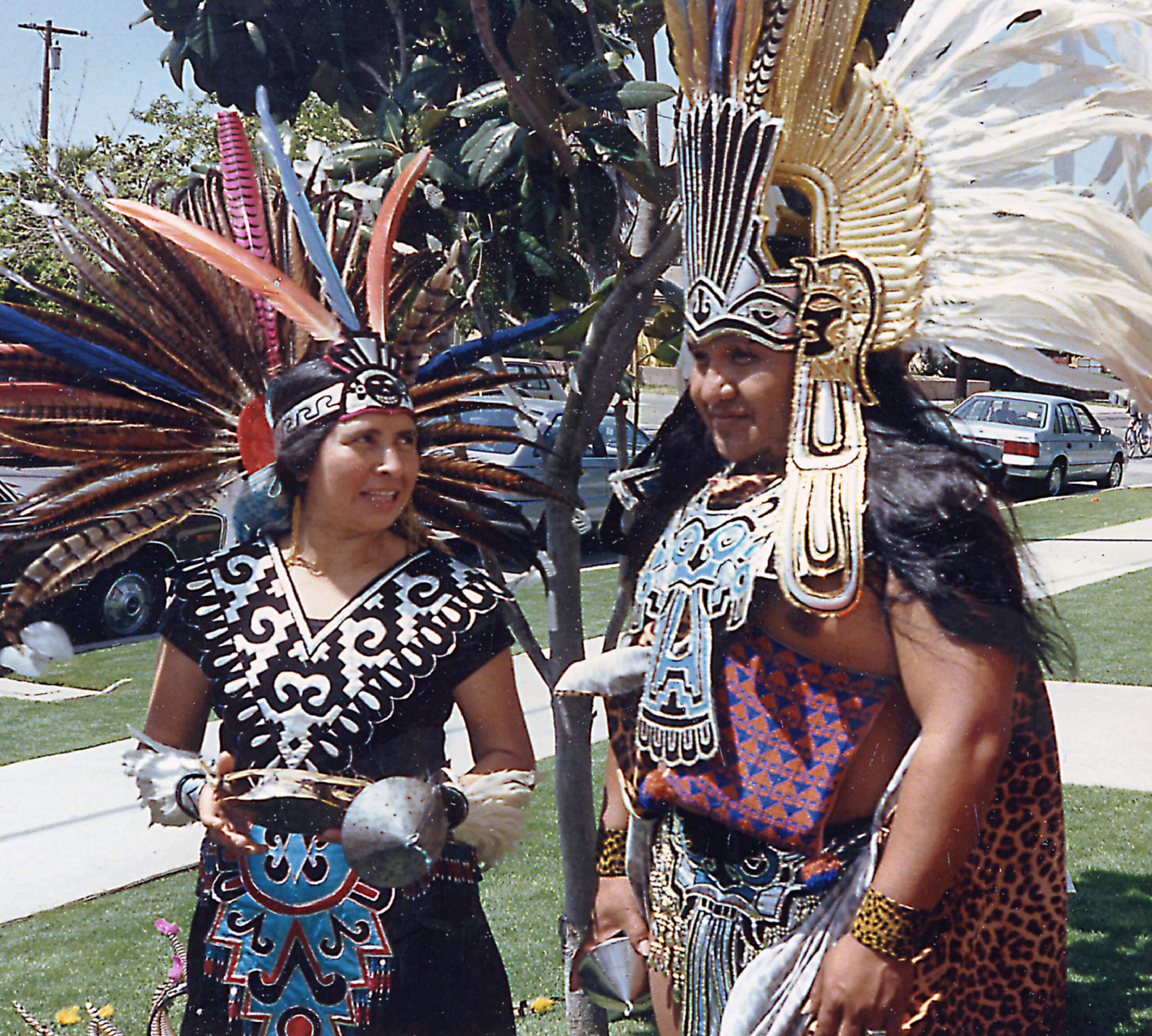 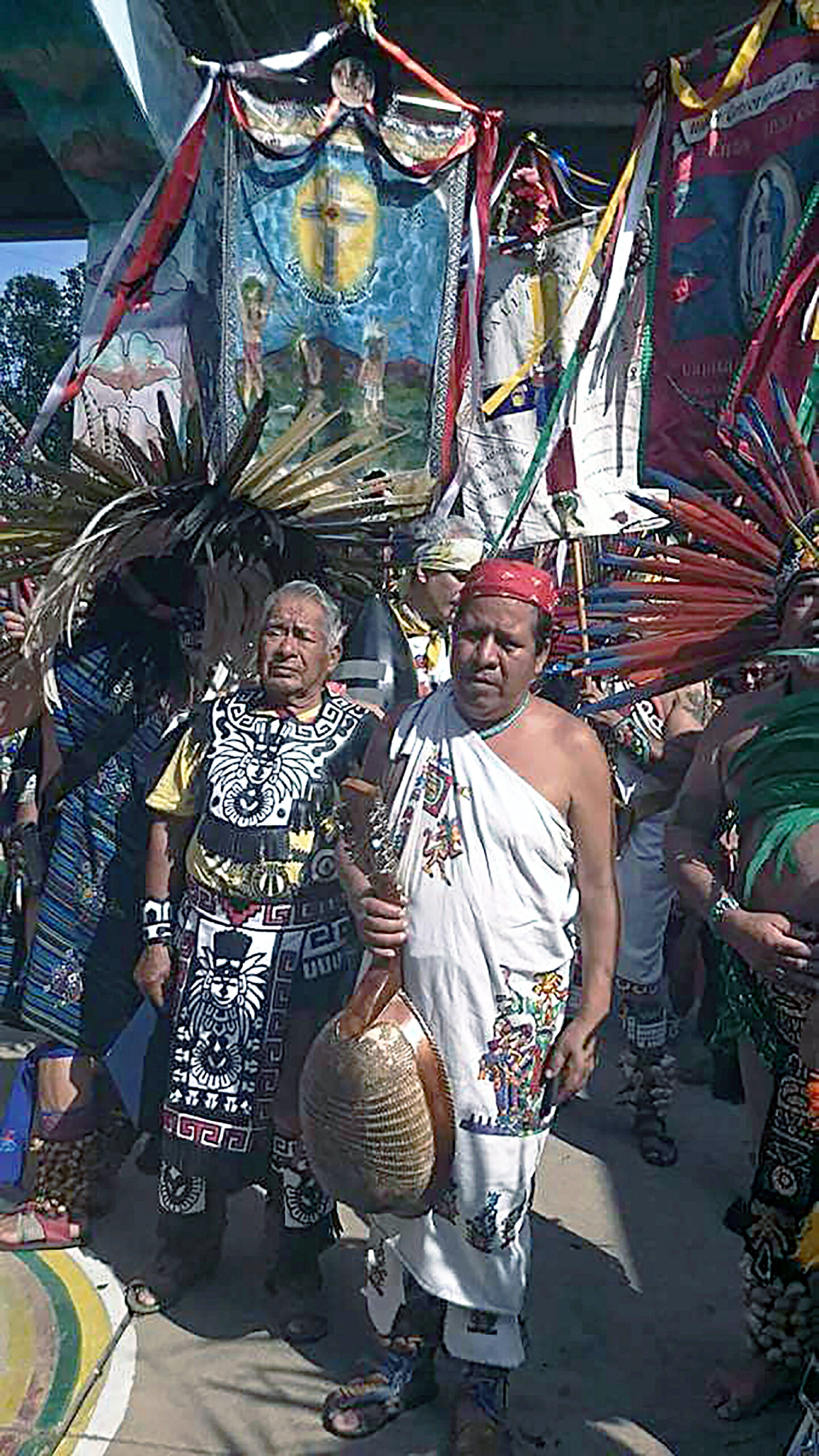 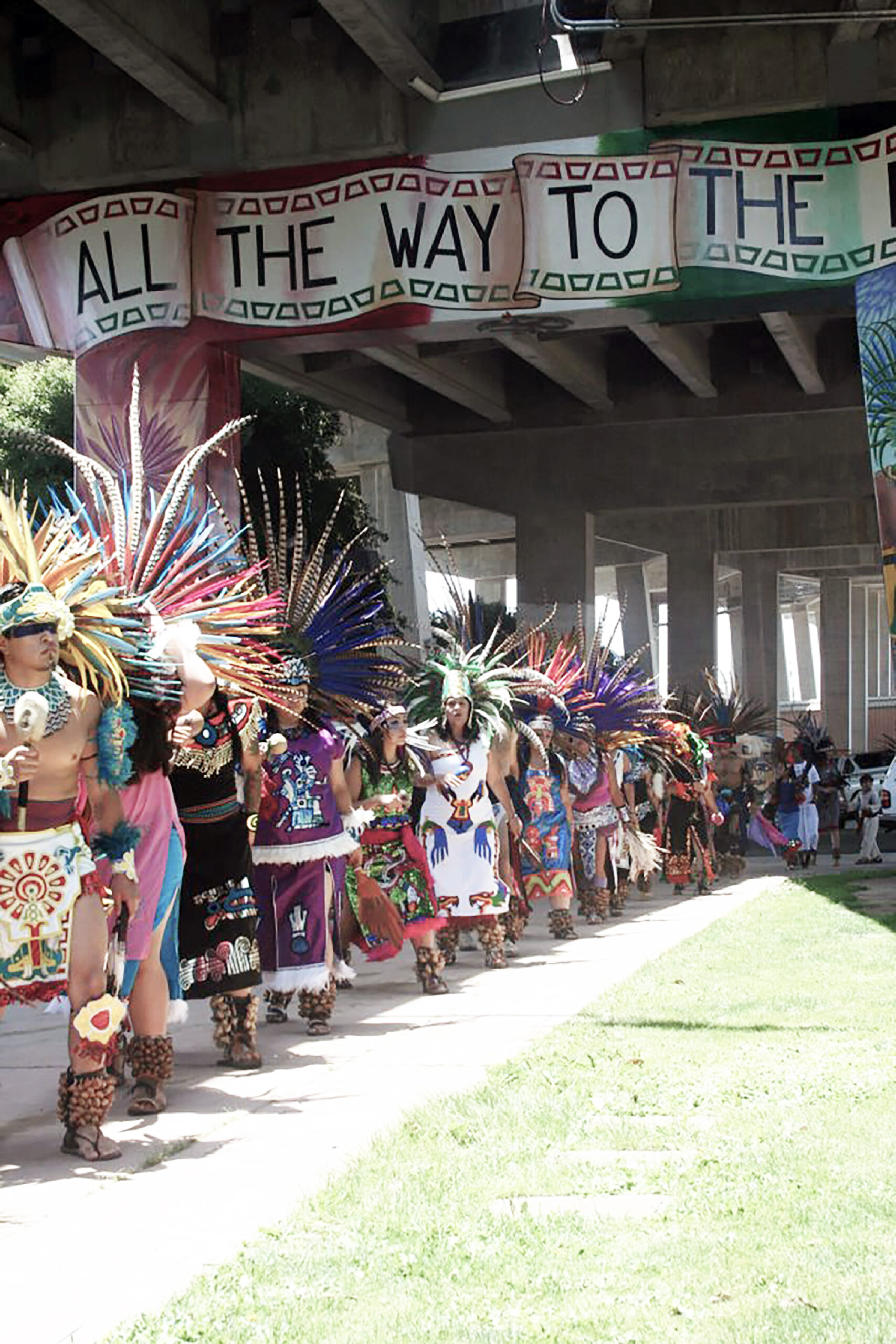 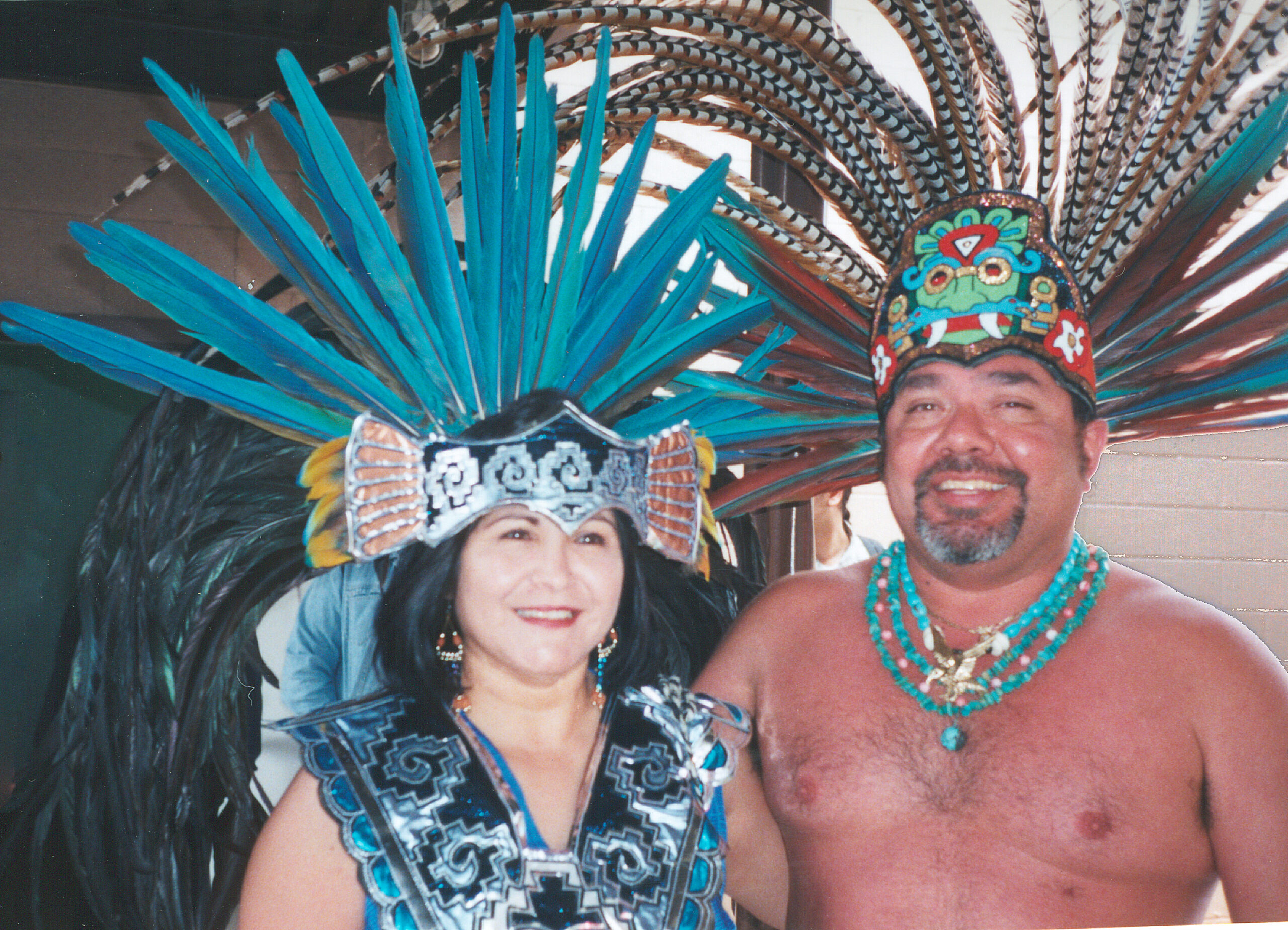 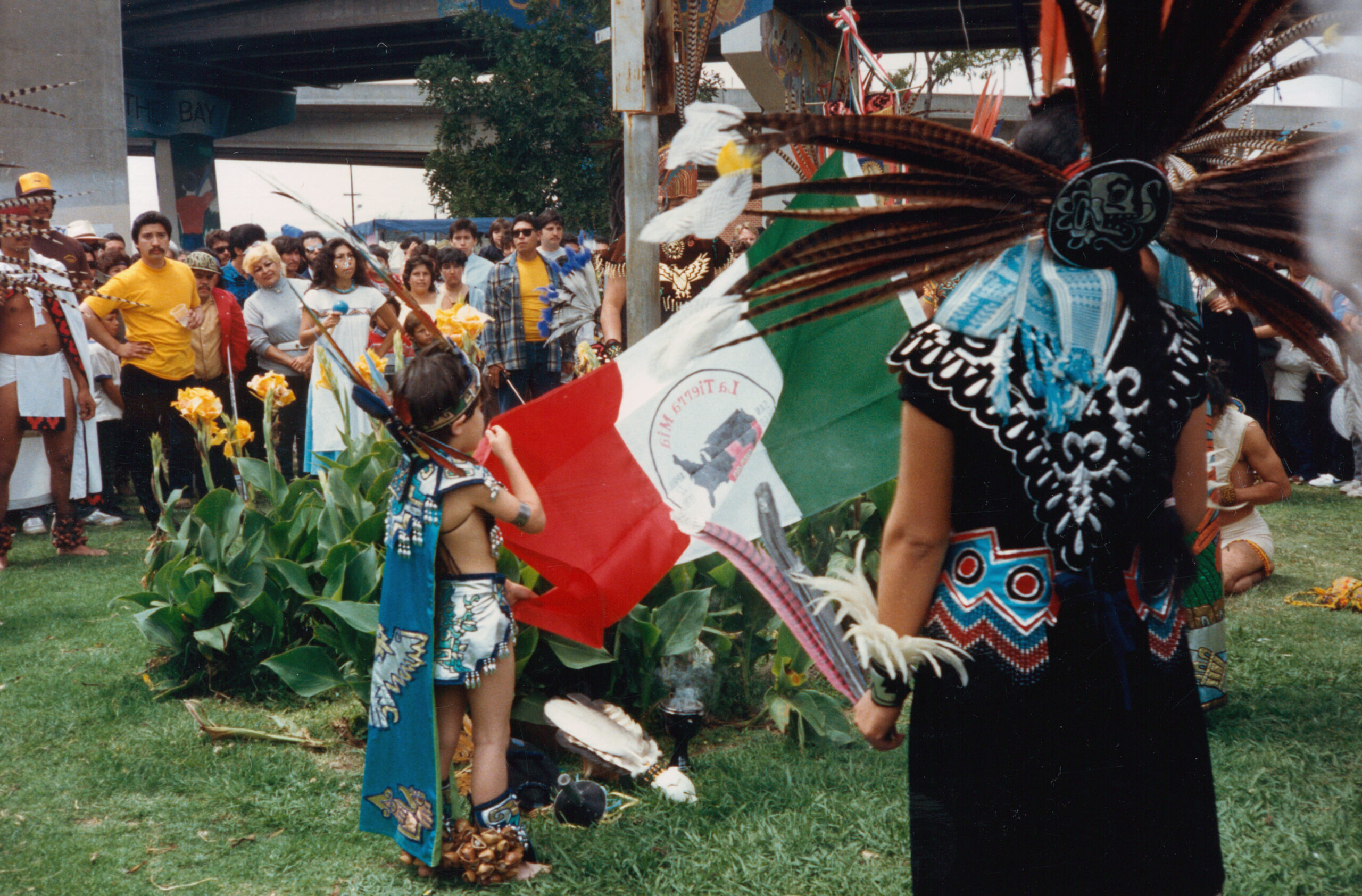 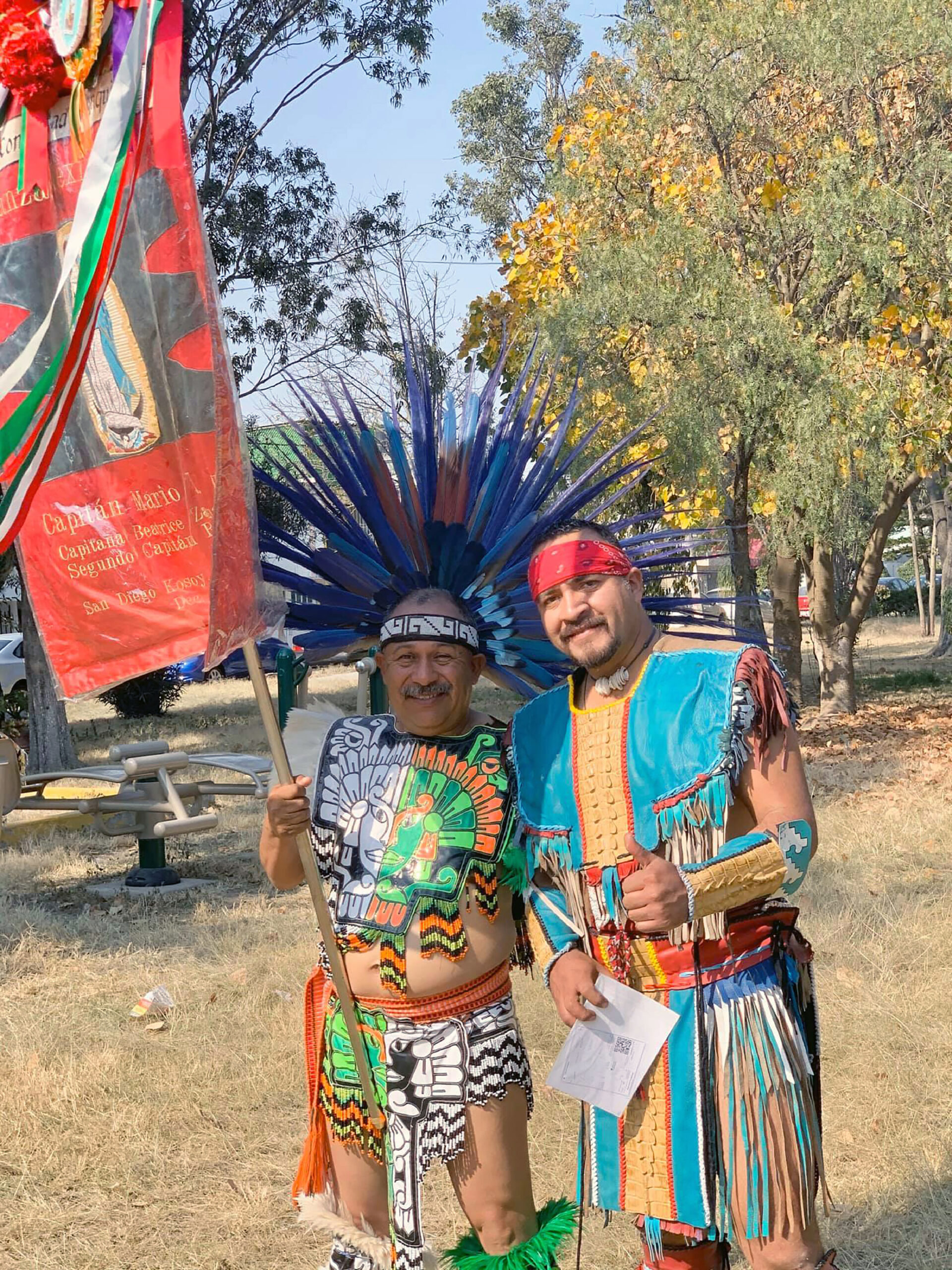 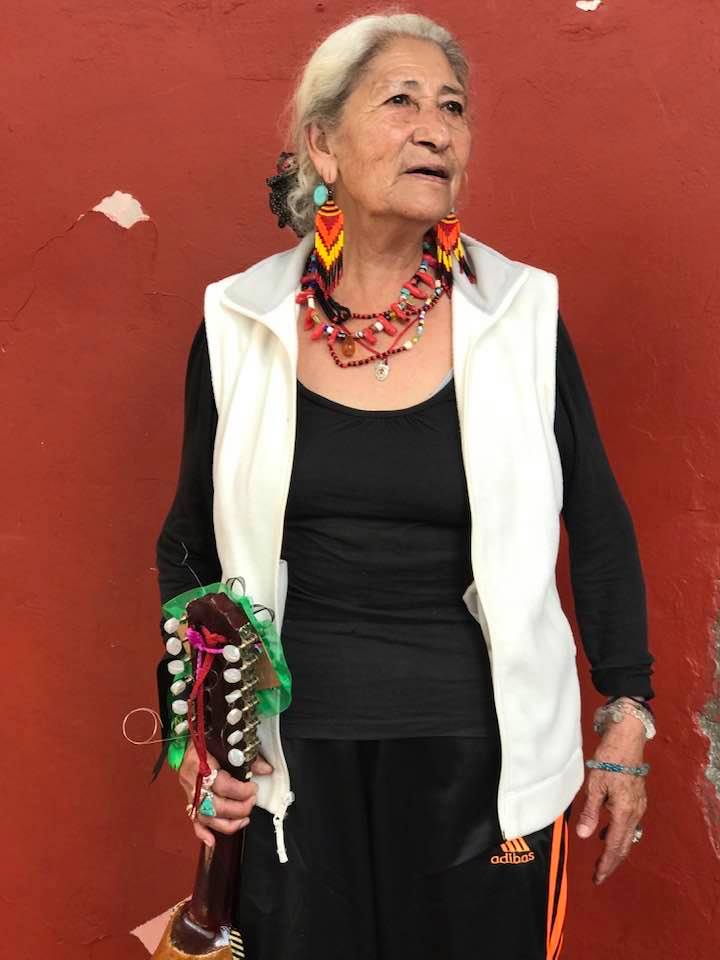 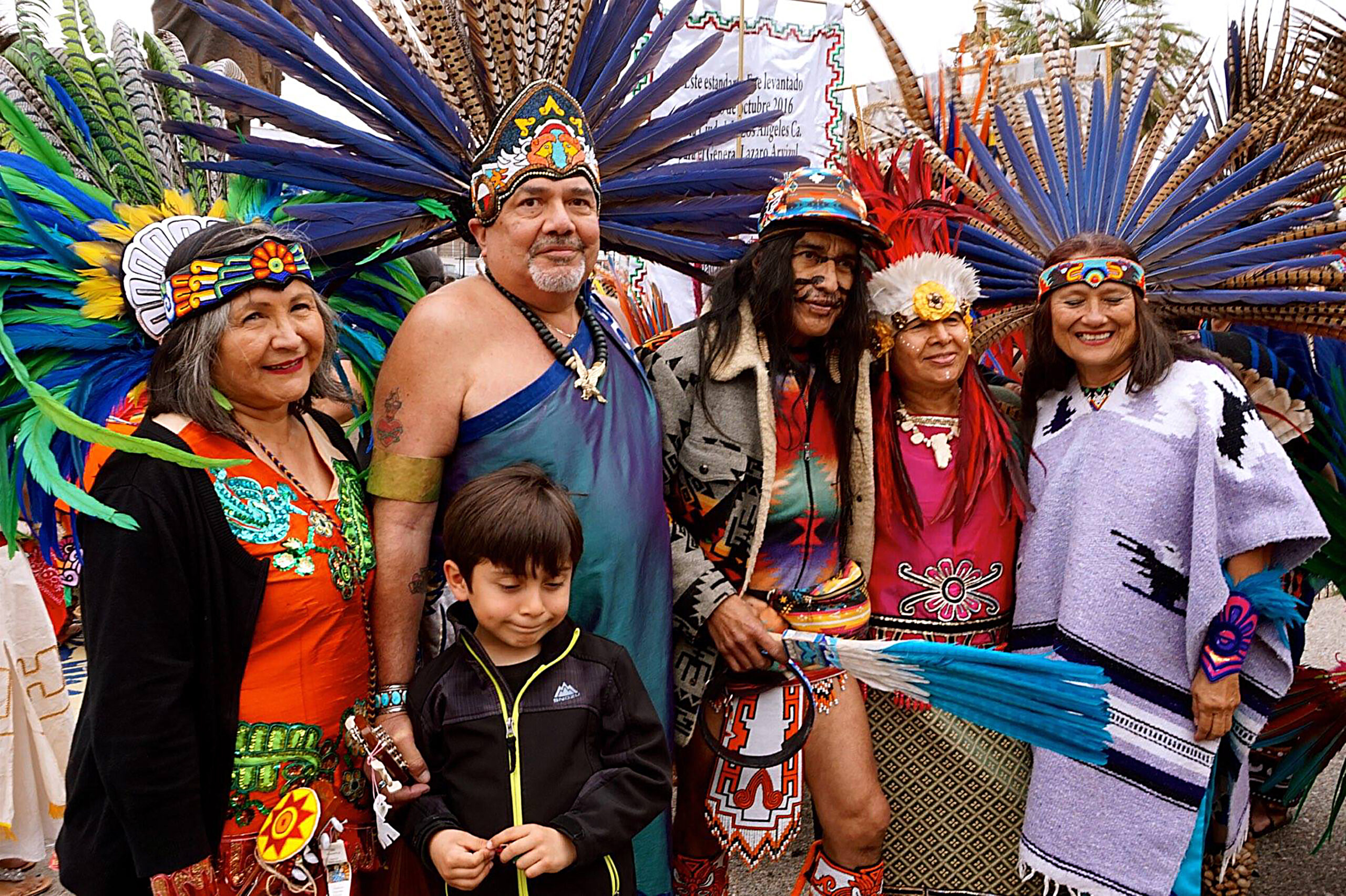 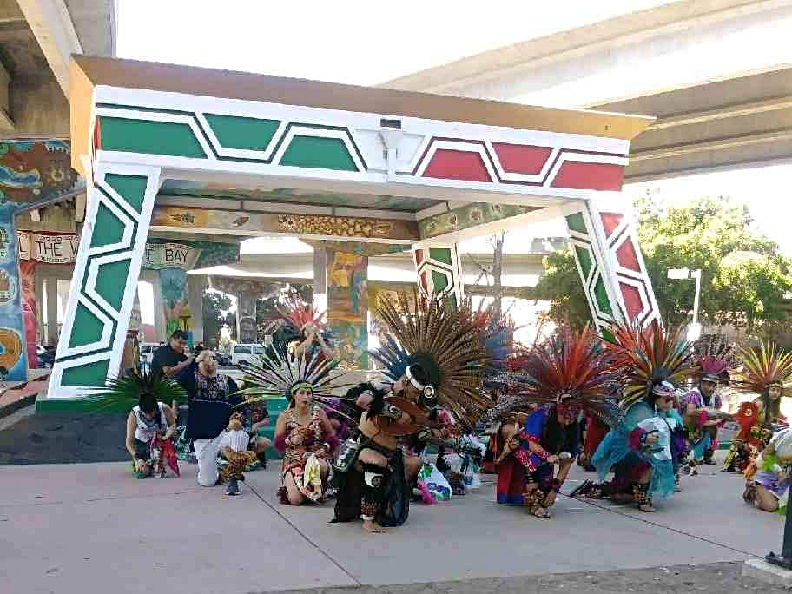 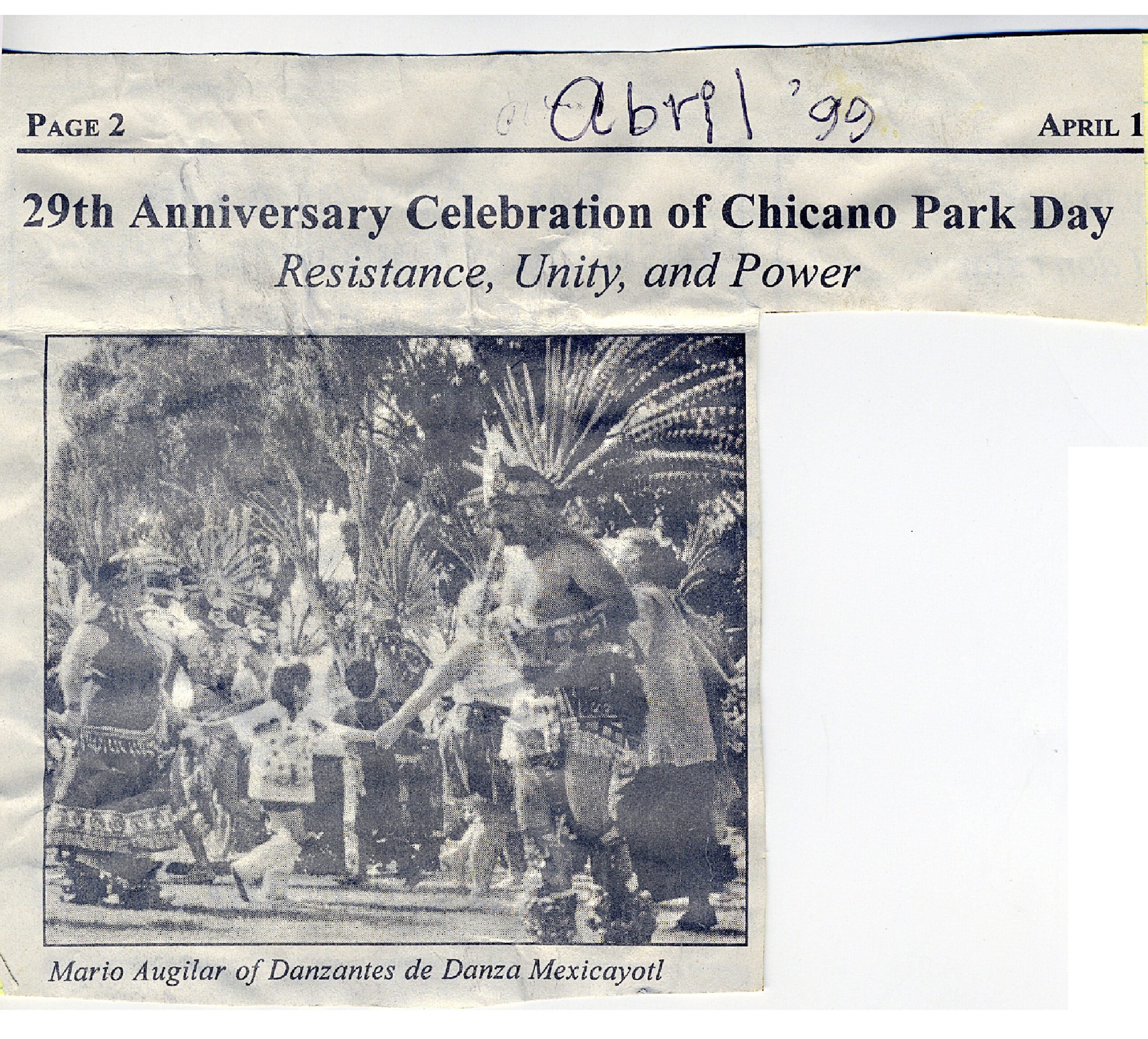